Limited edition rollerball pen on the occasion of the 700th anniversary of the death of Dante.

Announcing the first in a series of limited edition pens dedicated to the great thinkers, creators and scientists of world history. This pen pays tribute to Dante Alighieri, 13th century Italian literary genius and father of the modern Italian language. It is limited to a series of 100 fountain pens and 100 rollerball pens.

The result of a collaborative discussions between our Italian master pen artisan and our American representative, this special pen is handcrafted in Italy of solid sterling silver and engraved with a design that includes symbols of significance to our current pandemic crisis. The primary image is inspired by Gustave Doré, 19th century engraver and illustrator of Dante’s Divine Comedy. It comes from Canto XXXIV, in which Dante and Virgil exit The Inferno and see the stars again. An inscription from this canto, engraved on the pen cap, reads “E quindi uscimmo a riveder le stelle” (“and thence we came out to see the stars again”). At Grifos, our wish is that all will soon come out of the darkness to see the stars again. Also engraved on the pen are the North Star, symbol of Italy and guide to those who may have lost their way; the bust of Dante crowned in laurel, symbol of triumph over adversity and ignorance since the myth of Daphne and Apollo; and a fleur de lis, symbol of Florence, city of Dante, and of St. Louis, home to Grifos’ American operations. The silver is treated in an acid bath, rendering it a vintage grey of the night sky, with a chiaroscuro effect reminiscent of the patina of age. It is then engraved to reveal the brilliance of the sterling silver in all of the images. If you’d like, we can engrave the clip for you at no charge.

The rollerball accepts Parker-style refills which are readily available worldwide. The pen will be shipped directly from our workshop in Piemonte, Italy, and should arrive in 2-3 weeks.

There are no reviews yet. 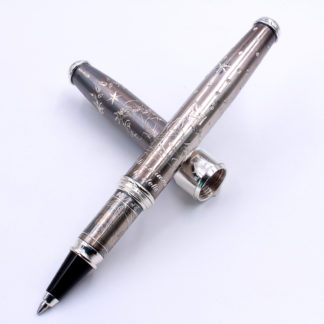